You have permission to edit this article.
Edit
Home
News
Features
Sports
Opinion
Calendar
Multimedia
About Us
Submit a Story 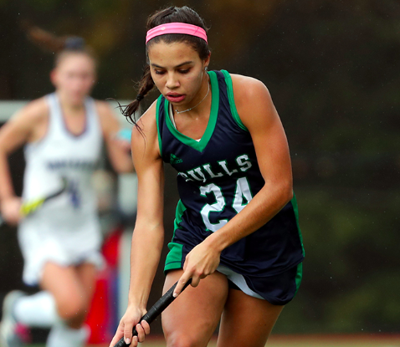 The Endicott field hockey team remains undefeated in the young season after a 3-1 victory over MIT on Tuesday night.

Each year, the National Field Hockey Coaches Association, or NFCHA, creates a poll to rank collegiate teams across the nation. Prior to yesterday’s contest, the Gulls ended up in the number 20 spot on this poll, determined by Division III coaches within the NFCHA.

After celebrating their achievement, it was time to play and prove their ranking to the Gull faithful. The team came out strong right off the bat with sophomore Sydney Poulin scoring a goal in the first 1:33 of the game. The goal was assisted by senior Kristen McCarthy, who’s racked up a stellar 5 assists in her past 3 games.

After the tally, there was no scoring action until the second half as MIT scored off a penalty shot, tying the game. Only three mere seconds after that goal, the Gulls came back and scored with a shot from freshman Olivia Lampasona. This was her first goal of her collegiate career, helping the team secure the lead once more.

As the tempo of the offense began to pick up, so did that of the defense. Junior Taylor Farrin was aggressive in net, stopping three of the four shots on goal. The collective defensive effort was prominent, and was certainly reflected in the score of the game.

During the second overtime period, Jaylin Grabau, a junior, scored the go-ahead goal, assuring Endicott’s victory. On the same day as the team’s well-deserved ranking recognition, they got to celebrate with a win.

The Field Hockey team will be on the road this Thursday, September 12 to face off against Tufts at 5:00 PM in a non-conference game.